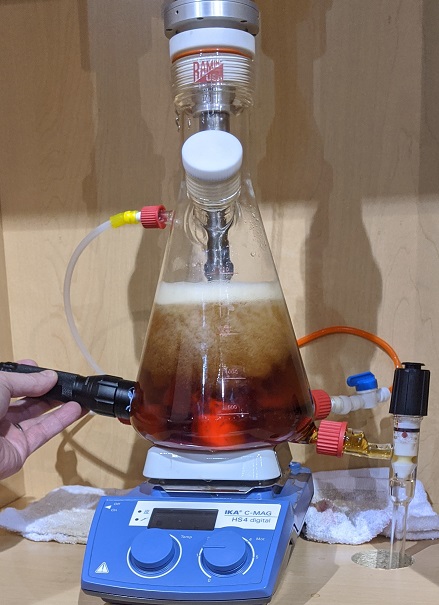 I recently came across a newspaper article about a company, Persedo Spirits, with a patented process that discussed polishing whiskey.  The article mentioned turning bad liquor into good. Over the years I have seen and tasted several other spirits produced by some type of contraption, they were poor substitutes for and easy to detect apart from properly aged spirits.  I would not have thought twice about this latest company except for the fact they were in my backyard in Alvin, TX which is about 35 miles south from me.

They had convinced the newspaper reporter that their polished spirit “was considerably smoother with richer flavors”.   I wondered if they would entertain a local group of bourbon enthusiasts for a visit. I sent them an email and received a phone call back that day from the company President Ricky Ford.  We had a nice chat and I was honest about being skeptical, but I committed to approach his products with an open mind. Ricky understood and said he welcomed the challenge and would love to show us their facility. We picked a date and I arranged a group composed of myself and four other members from the Houston Bourbon Society to visit.

For me to be convinced that something positive was really happening I wanted to bring my own whiskey and watch it go through their process then conduct a triangle blind taste test with it.  Our group decided to use Evan Williams 100 proof Bottled in Bond for this test. It is a solid economical pour, but in my opinion is on the young side with some rough edges. Ricky told me their process required a minimum of 1.5 liters.  I purchased a 1.75 liter bottle and a 750 ml bottle of the Evan Williams and blended the two together to ensure homogeneity. Upon arriving at Persedo Spirits, we tested the proof and temperature of our test Bourbon to compare to the post process.

I knew they were located in an industrial warehouse space so I had a picture in my mind of what the place would look like.  I was wrong about that. About one quarter of the location is built out into a beautiful man cave environment with plenty of TV’s, seating, and a full bar.  Their crew welcomed us and the bar was fully set up with snacks and Glencairn tasting glasses. Ricky started by telling us the history of the process that his father had invented and how they progressed from that to their more complex patented process.  We took our Evan Williams and started the process on their small-scale device, which took about 30 minutes. He then showed us a much larger version that they use in production. Their business is modeled to handle having others send them spirits in totes for processing or they can license their equipment to be installed at their customers facility.  They are a federally registered DSP.

One thing they were very clear on is they respect traditional barrel aging.  They are not trying to replace it. They have a slogan of “Where Technology Respects Tradition”.  So, what exactly does happen in this process? You can visit their website for more detailed information, but I’ll give an overview here.  The spirit is placed under a mild vacuum while being subjected to ultrasound waves; it’s also subjected to the addition of food grade Nitrogen and CO2 gas.  The parameters can be adjusted based on the desired outcome. Other companies have used ultrasound before in an effort to simulate traditional aging, but the other elements Persedo claims help them be more selective about what changes.

While we were waiting for our sample whiskey to go through the process, our group tasted side by side a few other whiskeys they had previously polished.  They have a bar with a large selection of various spirits they had polished. For the first sample, I spotted Wild Turkey 101 on their bar. I drink enough WT 101 that I know the profile well.  I could easily tell the difference between the 2 samples. I preferred the before version, but that could be due to how I expected it to taste. We also tried samples of before and polished MGI 95/5 Rye in the form of Bulleit Rye, a local produced bourbon, and Weller SR.  For me, I’m not a fan of Bulleit Rye before or after. All five of us agreed that the local Bourbon was much better in the polished version.

By this time our Evan Williams was ready.  We proofed the after version and temperature corrected the proof. It had dropped 1 point, which in a 100-proof bourbon is also 1%.    My testing in all my drinking for science projects, where possible, is done in triangle blinds. Each taster is given 3 samples which might be 2 of the processed and 1 of the standard or vice versa.  Regardless 1 of the samples will be different, so the first step is to determine if the 1 different sample could be identified. The follow up question is, was the odd sample better or worse overall?

Ricky stated that the processed whiskey tends to taste better a few days after polishing.  Based on what I have learned about marrying whiskies I can accept that claim. Ricky had polished another large bottle of Evan Williams 100 proof 1 week prior, so we conducted round 2 with it.

I know this was a small sample set, but 5 out of 9 times in the triangle blind the odd sample was correctly identified.  For me, this shows Presidio’s polishing process does change the whiskey. However, in the case of Evan Williams 100 proof, most of our group preferred the unpolished whiskey.  In the case of this Evan Williams, for me the difference was subtle but the polished whiskey developed a minerally note to it that makes the whiskey taste different and somewhat artificial.  I was able to identify it in the triangle blind. From the visit I did bring home the Evan Williams bottles in hopes to have more participate in a future triangle blind.

In tasting through the other samples provided, I tend to think their polishing process works better with younger spirits.  If you are a craft whiskey distillery that needs to sell young whiskey for cash flow, I’d suggest seeing for yourself what your whiskey tastes like before and after polishing.