Today’s post is a drinking for science twofer.  First, I’ve added to my testing projects on “Do spirits change in the bottle once opened?”, but this time with rum.  Second, is a blind tasting of modern era Wild Turkey with bottles from 2010, 2015 and 2020.

I’ve tackled the question of “Does bourbon change once the bottle is opened?” 3 different times.  My conclusions are that it does not change enough to be perceivable when stored up to 1 year with a good seal, out of bright light, normal room temp, and a fill level at around 50%.  You can read about this info here – https://tater-talk.com/2018/08/30/did-my-bourbon-change-in-the-bottle-1-year-test/

Given my past conclusions, I have wondered if heavily peated scotch or higher ester rums would result the same.  Are these esters more volatile?  One way to find out is to test it. I purchased 3 bottles of Stolen Overproof Rum 375ml from the same store on the same day. On Jan 1, 2021, I poured one of these into a 750 ml bottle.  Over the next 12 months, I opened that bottle 28 times and swirled it around exposing it to fresh air.  The bottle was well sealed each time and stored in a dark cabinet at normal room temperature.  On Jan 20, 2022, I had 11 tasters over for a triangle blind tasting.  The other 2 bottles of Stolen were opened right prior to the test.  Each taster had 3 Glencairn glasses without knowing which glass had which sample.  The objective was to see if they could identify the odd sample.  I also gave them a choice of saying no difference, though none elected that option.

If the testers randomly guessed 33.3% would luckily identify the odd sample.  In my test 6 of the 11, 54.5%, were able to correctly identify the odd sample which is roughly 1.6 times the random guess odds.  My group of tasters are all folks who routinely drink spirits neat and would be considered above the average consumer in a test like this.  Still, 45.5% were not able to identify the odd sample.  Of the 6 that identified the odd sample, most thought it was the worst of the three, but all commented the differences were subtle. Unlike my bourbon tests, I think the results here indicate that some type of small changes likely occurred.  I think storing the bottle half full and opening it a total of 28 times is well above normal and makes for a good test.   I still think spirits are remarkably stable once opened if you follow best practices of storing bottles upright, tightly sealed, out of any bright lights, and in normal room temps.  If you get down to the last few pours in a bottle, either finish it off or, if you want to hold on to some, transfer to a 50ml glass sample bottle and properly label it.

For you stat nerds and other trolls, I’m well aware I didn’t have a N number of 15.  Take what you want from the data given, but no need to give your opinion until you have ran similar tests, which are easy enough to do, and published it. 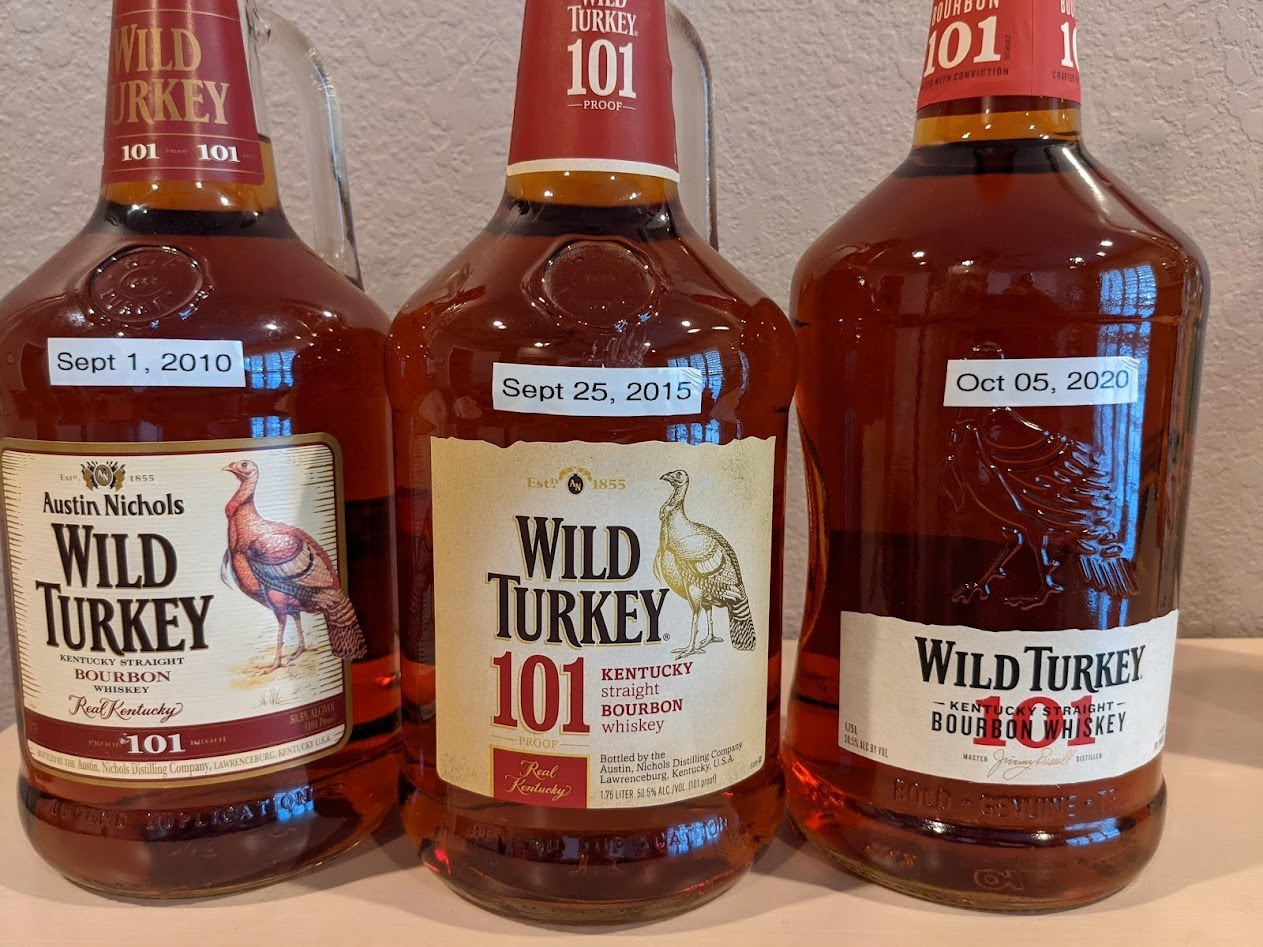 For my fellow Wild Turkey 101 fans, I put together a blind tasting of modern era WT 101 with bottles from 2010, 2015 and 2020.  This was the same group of 11 tasters. I provided a score sheet and asked the tasters to rank in their order of 1st, 2nd and 3rd place.  I will say I learned my lesson and never again will I attempt a twofer test in one night, some of my tasters left indecipherable markings instead.  Perhaps vanity was the cause, as maybe they did not want to be perceived as having scored this wrong?  The scores of the 8 tasters that correctly followed instructions are as follows:

I’ve since had a chance to sit down with these 3 multiple times, although not blind.  Honestly, I go back and forth between favoring 2010 and 2015.  Both are better to me than the 2020.  This is not knocking current WT 101 as I still think it’s one of the best values currently in bourbon.